Locally in Loxahatchee, Florida, my friend and colleague Paul R. Reillo, Ph.D., who is on the board of directors of my Wellness Research Foundation, placed a group of bongos back into their native environment in Kenya a few years ago. And without the Conservatory, it’s possible you may never have seen or heard of a bongo antelope. 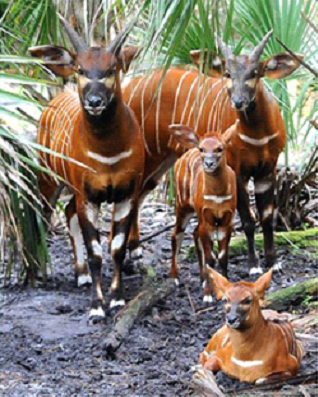 As part of a repopulation program at the Rare Species Conservatory Foundation at Loxahatchee, FL, these adult bongos were successfully transported to Aberdares Conservation Area in Kenya, where they have become the proud parents of two baby bongos.

Paul used to be the Director of Conservation and Research for the Palm Beach Zoo. He has a Ph.D. in zoology from the University of Maryland and B.S. in environmental engineering from The Johns Hopkins University. Then he got interested in conservation. He became the director of the Rare Species Conservatory, which raised money to buy 30 acres out in Loxahatchee, FL.

Paul is also co-director of the Tropical Conservation Institutes (TCI) at Florida International University. With a combination of private and Federal funding, FIU and TCI have joined forces to stop extinctions by empowering FIU graduates and conservation practitioners to protect ecosystems and species in the tropics and sub-tropics.

In Loxahatchee, the Rare Species Conservatory Foundation have monkeys and birds, and Paul’s been very involved in saving the rare Imperial Amazon Parrot in the Caribbean and others from South America.

But for the bongo project, they started with 18 of these rare animals. The Conservatory spearheaded the effort to bring the bongos to Kenya from across North America, gathering bongo from 13 zoos, including the San Diego Zoo and the Cincinnati Zoo.

The animals were quarantined for three months at the White Oak Conservation Center in Yulee, FL. Then they were flown out of Jacksonville airport, with a brief stop in Atlanta for inspection by the U.S. Fish and Wildlife Service and U.S. Department of Agriculture.

Then the bongos flew on this big, military-contractor transport plane (DC-8) across the Atlantic to their native Kenya. After 44 hours, the bongos were released within a specially fenced habitat at the Mt. Kenya Wildlife Conservancy, on the slopes of Mount Kenya, the second highest mountain in Africa.

And thanks to Paul and the staff of the Rare Species Conservatory, the bongos are making a comeback. They’ve been living there in this kind of semi-wild environment in the reserve for almost 10 years.

So far so good. I think the population is up to 80 or so, so they’re reproducing very well.

And there are more bongos still in Florida. The RSCF has expanded its breeding program to try and return even more bongos to Africa. You can visit their homepage and follow the bongos’ (and other rare animals’) progress, or donate to the cause: http://www.rarespecies.org. Any contribution is appreciated and is tax-deductible.

While I’m in Africa I also do a lot of work on conservation of another kind… conserving herbal and traditional healing knowledge. I’m hoping to play some small part in saving not only vanishing animals, but healing knowledge that will also vanish if we don’t do something about it.

Yes, I would like to help! I pledge to donate